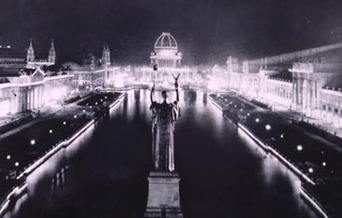 The Court of Honor at the Chicago's World Fair (Library of Congress)
In spite of efforts to smudge AC, good things were happening for Westinghouse and Tesla. "The Westinghouse Corporation won the bid for illuminating The Chicago World's Fair, the first all-electric fair in history. The fair was also called the Columbian Exposition — in celebration of the 400th Anniversary of Columbus discovering America. Up against the newly formed General Electric Company (the company that had taken over the Edison Company), Westinghouse undercut GE's million-dollar bid by half. Much of GE's proposed expenses were tied to the amount copper wire necessary to utilize DC power. Westinghouse's winning bid proposed a more efficient, cost-effective AC system" (PBS).

On May 1, 1893, opening night, President Grover Cleveland pushed a button and a hundred thousand lamps powered by alternating current illuminated buildings. "This "City of Light" was the work of Tesla, Westinghouse and twelve new thousand-horsepower AC generation units located in the Hall of Machinery. In the Great Hall of Electricity, the Tesla polyphase system of alternating current power generation and transmission was proudly displayed." (PBS)  For twenty-seven million people, it was clear the world should use AC.  Since then, more than 80% of electrical devices in the US were powered by AC.
Article from the New York Times About the Colombian Exposition in 1893
niagara falls
Proudly powered by Weebly