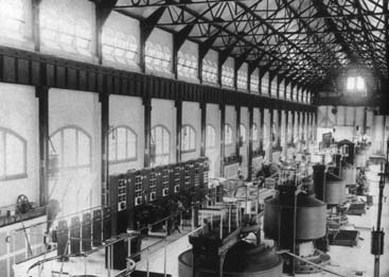 Interior of Edward Dean Adams power station at Niagara (The Smithsonian Institute)
Harnessing Niagara Falls was something people only dreamed about.
"Since his childhood, Tesla himself had dreamed of harnessing the power of the great natural wonder.  And in late 1893, his dream became a reality, when Westinghouse was awarded the contract to create the powerhouse." (PBS)  The international Niagara Falls Commission headed by Lord Kelvin, rejected all other proposals from around the world, including DC from Edison, and chose Westinghouse and Tesla.


"You have Edison using direct current and Tesla who sells his patents to Westinghouse using alternating current which is a much better device.  But people don’t know that.  If Edison had succeed at Niagara Falls, all of the industry for the whole northeast would have had to been located along Niagara Falls.  If Tesla would have succeed with Westinghouse, all the industry could be anywhere throughout the whole northeast.  You could put a factory in the middle of a forest as long as you could get a long-distance line.  We live in New England, and when you drive along the rivers you see all factories well up until 1897 every factory had to be along the river because they had to be close to the power source.  So that was the difference.  There was no comparison between the two." (Dr. Seifer)

"The construction period was traumatic for engineers, mechanics and workers, but it weighed most heavily on investors.  Project backers included several of the wealthiest men in America and Europe, including:  J. P. Morgan, John Jacob Astor, Lord Rothschild, and  W. K. Vanderbilt.  After a five-year nightmare of doubt and financial crises, the project approached completion." (PBS)

When the switch was thrown, the first power reached Buffalo at midnight, November 16, 1896. The Niagara Falls Gazette reported,

"The turning of a switch in the big powerhouse at Niagara completed a circuit which caused the Niagara River to flow uphill."

"The first one thousand horsepower of electricity surging to Buffalo was claimed by the street railway company, but already the local power company had orders from residents for five thousand more. Within a few years the number of generators at Niagara Falls reached the planned ten, and power lines were electrifying New York City. Broadway was ablaze with lights; the elevated, street railways, and subway system rumbled; and even the Edison systems converted to alternating current." (PBS) 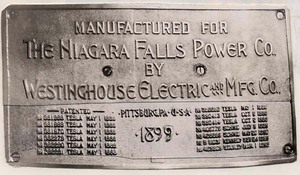 The patent plaque which shows Tesla as the inventor of the hydroelectric power system. (Courtesy of Dr. Seifer)
But there were complications. The War of the Currents left both companies drained.  "Years of litigation, the absorption of Edison's company and others by professional managers at GE, and the financial teetering of Westinghouse all contributed to a takeover. This was the era of the Robber Barons, and one of the biggest was ready to make his move. J. P. Morgan, hoping to bring all U.S. hydroelectric power under his control, proceeded to manipulate stock market forces with the intention of starving out Westinghouse and buying the Tesla patents." (PBS)


Westinghouse begged the inventor, asking for an escape from the initial contract dealing with royalties. "In a magnanimous and history-making gesture, Tesla said he tore up the contract. He was, after all, grateful to the one man who had believed in his invention. And he was convinced that greater inventions lay ahead. The Westinghouse Electric Company was saved for future triumphs. Tesla, although sharing the glory, was left forever afterward in recurring financial difficulties." (PBS)
conclusion
Proudly powered by Weebly