Word spread that a foreigner with extraordinary talent came into the field.  Investors approached Tesla and asked him to develop an improved method for arc lighting.  The group financed Tesla Electric Company.  Tesla began work and invented a lamp with beauty and efficiency.  Profits went to the investors, and Tesla got valueless stock certificates. 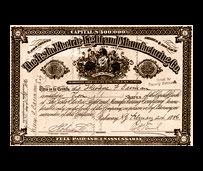 Stock Certificate for the Tesla Electric Company
Shortly after, A.K. Brown of the Western Union Company invested in Tesla’s AC motor.  In a tiny laboratory, Nikola Tesla constructed all the workings for a structure of AC power generation and transmission now used throughout the world.

"The motors I build there were exactly as I imagined them. I made no attempt to improve the design, but merely reproduced the pictures as they appeared to my vision was always as I expected."
- Nikola Tesla

In 1887, Tesla filed for seven US patents dealing with his polyphase AC motors and power transmission. This included complete structures of generators, transformers, transmission lines, motors, and lighting. These ideas were issued without challenge. Little did anyone know how valuable these patents would be to changing the world.

"An adventurous Pittburgh industrialist named  George Westinghouse, inventor of railroad air brakes, hear about Tesla's invention and thought it could be the missing link in long-distance power transmission. He came to Tesla's lab and made an offer, purchasing the patents for $60,000, which included $5,000 in cash and 150 shares of stock in the Westinghouse Corporation.  He also agreed to pay royalties of $2.50 per horsepower of electrical capacity sold.  With more inventions in mind, Tesla quickly spent half of his newfound wealth on a new laboratory." (PBS)

Created by Time Toast. Scroll using the blue bar on the bottom. Highlight points to receive information. Click on the points for the entire story.